Art and Bombers: the Creativity of Fan Recipe Submissions, Post #1 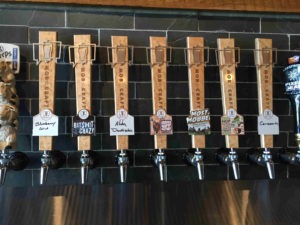 (Editor’s Note: this is the first post in a semi-monthly series called, “Art and Bombers: the Creativity of Fan Recipe Submissions.”)

This month’s voting round brings some doozies, with ABV up to here. If you could see me, I’m pointing at my Adam’s apple. I should be pointing at my gaping, watering mouth as I gawk at all these gaudy-delicious, high-gravity beer recipes.

But for this blog series, we’re interested more in the creative pathways to the palatable pleasures, less in the brute force of alcohol strength. (Mental note: start a series on high ABV beers . . .) In each post, we’ll examine the current month’s voting round, diving deep into one recipe and poring over others. We’ll study how the recipes re-imagine traditional forms within the context of industry constraints. (Bombers rhymes with Commerce. “Art and Bombers,” get it?)

When asked about craft beer experimentation, what comes to mind first? For me, exotic ingredients. I think of the deliciously strange (cat poo coffee, anyone?) or the look-at-me bizarre (“Brewed with whole-wheat crust, tomato, oregano, basil and garlic.” That’s a quote.)

The “special ingredients” listed in these January 2016 fan recipes seem dignified by comparison, sedate, even. Juniper paired with spearmint — that’s about as wild and crazy as it gets with this bunch. After that, we have basil twined with grapefruit, a sahti holding hands with a barleywine, a peach stout aged in peach brandy barrels . . . Not exactly a Mardi Gras parade of miscreants.

Just Try to Pick a Favorite, I Dare You

Yet even without wacky experimentation, we have a marvelously creative crop, here. Have a look. I challenge anyone to pick a single favorite after going through the list just once. We’ve all seen lots of good brew recipes in our day. To excite us, a recipe must do something new and different. If it’s not exotic ingredients, then what is it?

This group of recipes does it with shrewd, intricate modifications of both classic standards and current fashions. Check out for instance the recipe Fresh to Death. The grain bill lists Abbey Malt as the base malt, at fifty percent of the grist. Three specialty malts — or one could say the other specialty malts, since Abbey is actually a specialty malt, as well — make up the other half: Bonlander Munich, brown malt, and Victory.

Got that? Four specialty malts. Period. A maltster’s Dream Team, set to impart trench-deep color and flavor. Mellow amber and orange hues from the base, saturated by the dusky tincture of the brown malt. Flavors of sharp, toasted bread and vivid, honey sweetness from all that Abbey Malt. Finer notes from the “three” specialty malts — overdone biscuit, mildly roasted nuts, bitter chocolate, to name a few. There’s also a reasonable dosing of friendly cascade hops and dry English ale yeast.

So, the recipe is for a massively malty brown ale, right?

Actually, it’s so much more. I haven’t yet mentioned the recipe’s pièce de résistance: juniper and spearmint. The juniper and spearmint pull the brew into balance with a synergistic, finishing touch, one that just may lead to true invention: a toasty, lusciously smooth — yet complex — refreshing malt bomb. What an awesome and original idea for a midwinter beer. So original in fact that “refreshing” has probably never before modified “malt bomb” in a single sentence.

Defying the Gravity of Trends

Elsewhere among the recipes, we see creative brewing stepping out of the tractor-beams of current trends.

My favorite is the oxymoronic, innovating-with-ancient-styles trend. Gose, gratzer, gruit . . . humans sure drank good beer in the dark ages. The ancient style of kolsch currently forms a mini-trend of its very own. Kolsch appeared thirty-seven times at the 2015 Great American Beer Fest. Even Bon Appetit Magazine has felt the need to do a roundup of kolsch specimens.

One January 2016 recipe gives us a delectable sounding kolsch, The Royal Citrus. It breaks with the orthodox kolsch in a number of ways. It boosts its alcohol strength a bit (6.5 percent vs. the classic Kolsch at 4-5 percent),  balanced by a striking complexion of basil and grapefruit.

Another January fan recipe riffs on the ancient style of sahti. Snowkite Sahti sure ain’t your mummy’s sahti. The recipe cranks the hops and malt to American-style barleywine levels; spices it up with juniper and rye; lays down the smoothest roasted backing track of Midnight Wheat and oatmeal; and brews it to 10.5 percent strength.

Two other recipes work the trend of liquor-barrel aging, but not with bourbon barrels. One calls for peach brandy barrels, the other calls for rum barrels. Although they both sound tasty, I wonder: why exactly did they step off of the bourbon-barrel bandwagon? Was it experimentation or was it out of necessity?

I had in mind the bourbon-barrel shortage.

A few years have elapsed since bourbon-barrel aging went craft-beer mainstream. Because of its popularity, everyone and their Side Project has feverishly snapped up bourbon barrels to meet demand . Add to that the decline in the harvesting of White Oak, and bourbon barrels become expensive and hard to come by.  Is that what’s pushed these two recipes out of the bourbon-barrel nest?

Rum-barrel aging has become a trend only more recently. So rum barrels should abound. And though real-peach-distilled brandy may be a seriously niche product, the peach brandy-barrel aged beer is even more rare. So there should be a surplus of those barrels, too.

Then, in creating a fan recipe, if you had to choose between expensive, hard-to-find bourbon barrels or cheap, plentiful rum/brandy barrels, would you even hesitate?

Sure, the beer in the recipe “Want to Shake Your Tree” is a peach stout. Isn’t that motivation enough, that the peach beer naturally fits with the peach brandy barrel? Hold on, though. Perhaps the recipe author chose the style based on barrel availability?

For the recipe “Coconut Rum Barrel Baltic Porter,” same question. Were the rum barrels chosen for expedience or experimentation? My assumption is usually that economics rule.

The bourbon-barrel shortage has ended** (if there ever really was one)! Henry at Mobcraft says they have vendors lined up for bourbon barrels, no problem. But peach brandy barrels? They’re so uncommon, Henry hasn’t seen them offered, at all, by any vendor he’s come across.

Sours, currently the trendiest of trends, don’t appear among this month’s recipes. (Or so I thought. Read
on . . .)

One recipe does describe itself as a “sour ale”: Black Tart: Outlaw. Looking only at the recipe, one might think this beer would get all of its sour acid from the fruit, as in citric acid and malic acid. Official style guidelines define sour beer as having sour acid from fermentation or from acidulated malt (acid malt) in the mash. By that definition, Black Tart: Outlaw isn’t a sour beer.

However, what I didn’t account for were the invisible stowaways on the fruit.

Talking with Henry sets me straight. I now see it actually is a true sour. Henry explains that the recipe
will “. . . let the wildly prevalent Lactobacillus from all the fruit take over!”

Here’s how sour-beer blogger Michael Tonsmeire describes the souring action of fruit, on The Madfermentationist blog:

In addition to adding a distinct flavor, fruit adds sugar, and acids as well. Most of the sugars added by the fruit are eaten by the bugs and critters which in turn cause them to produce more acidity and boost the production of other flavorful byproducts. The [fruit] acids add a different character to the sourness since they are either malic or citric, both of which are a bit sharper than the lactic acid produced by the microbes in beer.

**From the comments section of a relevant Whisky Advocate editorial:

At Wicked Dolphin Distillery in Florida we have not experienced a barrel shortage but we have seen a huge price jump of about 10 – 25%.
I believe this is due to a few things – Yes, a lot more Craft Distilleries here and overseas and a huge amount of Breweries , we have also seen a lot more barrel brokers.
It seems to us things are calmer and the more experienced brokers are the ones still in business. Things are looking better this year.
(JoAnn Elardo)

More about the bourbon-barrel “shortage”: here, here, and here.

Which recipes look good to you this month? Start a “Top 3…” list in the COMMENTS, below.

CHOOSE WHAT GETS BREWED NEXT! Vote in this month’s competition.