How Can There Be So Many Great Stouts? 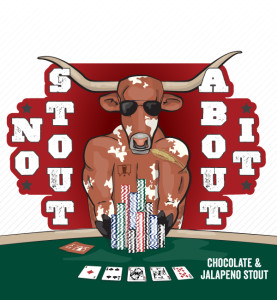 Google keywords data says it’s now the Season of the Stout. As if we needed a computer to tell us that. We’ve all looked forward to this since that first chilly morning in late-August, when shivers shook loose fond memories of standout beers from last winter. Like that morning you unwrapped a gift from your spouse, and it was that white-whale barleywine you chased but never caught the year before. Or that night you had a Delirium Noel right after an Abt 12 and, once-and-for-all, you saw how all Quads are Belgian Strong Darks, but not all BSD’s are Quads.

Great memories. There’s also a type of memory from last year, a whole category of memory, that one might call the “How can there be so many incredible stouts?” memory. Can you even count how many superb stouts you had last year? Some hoppy, some salted. From a firkin, from a cognac barrel. And each time you thought you’d had the tops of the season, that one would get bested a week later. How is it possible for one style to astonish us like that over and over? The Brew Your Own blog has a really good answer to that question, albeit in a slightly different context:

Offer a beer drinker a stout and you will find that most have some idea of what to expect. Many will brace in preparation for a sensory battle with a strong, bitter, black ale. Others will become warm just thinking of the full, roasted, chocolate and molasses flavors in their imaginary pint. And a few drinkers may get a little randy, anxious for the purported aphrodisiac to kick into gear!

So how can one beer style be so many different things to beer consumers? The answer is simple — “stout” is really not a beer style. This may sound blasphemous to style gurus, but my point is that stout is just the tip of the iceberg of a whole family of beers.

One standout member of the family is the chocolate chili stout. When traveling out West last year, we loved Mexican Chocolate Stout, from Denver’s Copper Kettle Brewing. To brew this specialty beer they took inspiration from a 500-year-old Aztec recipe. The Aztecs rewarded their warriors with a “gift from the gods”: a prized, unfermented, bitter and fiery beverage that paired roasted cacao beans with chilies, and a bit of cactus sweetener, served only to the victors of battle. A bit more recently (2011) when Copper Kettle first brewed their subtly spiced, oat-smoothed stout, they arose the victors, with a gold medal at the Great American Beer Fest.

As in the recipe for Mexican Chocolate Stout, modern brewers commonly include actual cocoa-based ingredients for stouts and other chocolate beers. Copper Kettle uses cacao nibs – crushed, roasted cacao beans. Cocoa powder, chocolate chips, even store-bought candy bars can get thrown into the mix. On the other hand, in the traditional stout (i.e., stouts from recipes or methods that date before the era of craft brewing) chocolate flavor comes without any actual cocoa ingredients, at all. Traditional stouts have long derived their chocolate-mimicking flavor from dark-roasted specialty grains added to the base malt for both color and flavor.

So what happens when the brewing of a modern stout combines both actual cocoa ingredients and dark specialty grains? Some serious, double-chocolaty chaos ensues. Baker’s chocolate bitterness arises from both sources, amplifying one another. This should come as no surprise. In the post-harvest industrial process, specialty grains go through a roasting process similar to that of cacao beans (though at pretty different temperatures), producing analogous chemical compounds that lead directly to the earthen and twangy flavors of chocolate.

For its role in this often dramatic chocolate beer, the pepper plays the magician. While diverting our attention with its heat, the pepper craftily infuses the chocolate stout with layers few would suspect in advance. It’s just a pepper, right? No. It’s so much more.

Part of the trick has to do with the differing timing of its heat. In some stouts the capsaicin waits a bit before causing a commotion in the back of the throat; in others it breathes its fire from the get go. Either way, the pepper’s ultimate power lies in its ability to juggle an array of flavors – molasses, vanilla, hazelnut, cherries, booze – while keeping the spinning plates of sweetness and bitterness in perfect balance. How does it do this? It casts a hop-like, drying spell over the entire show: a veil of mysterious aromatics upfront, a charming green-vegetal interest on the mid-palate, and a drying spice on the finish.

And, voilà! If done well, a chocolate chili stout can deliver drama with balance, complexity with finesse. It’s a tricky business. Can hot peppers go wrong?… That’s a rhetorical question, of course. We’ve all overdone it with the Sriracha once or twice and, while briefly comical, it isn’t fun. The challenge for brewers managing all these volatile elements – base malt, specialty grain, hops, cocoa ingredients, and now peppers – takes broad vision and state-of-the-art skill. But the upside potential of this style, loved by warriors and magicians alike, explains why the large “family” of stouts keeps growing.

For a fabulous chocolate chili stout, check out our October 2015 winner, No Stout About It!   Order NOW! (ships mid-December). 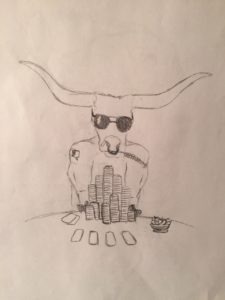 Label Sketch 1, for No Stout About It!

What was your favorite stout last winter? Start a “Top 5…” list in the COMMENTS, below.

As always, vote in this month’s competition. Choose what gets brewed next!