Wild and sour beers are not something you find a whole lot of here in Wisconsin. At MobCraft we are proud to have a Wild and Sour Program dedicated to exploring the unique flavor profiles wild and sour beers have to offer and present them to our customers with diligence and care. We launched our Wild & Sour beer program in Milwaukee, Wisconsin in 2016. Come experience wild, brett beers – fermented or conditioned with brettanomyces and tart, sour beers with lactobacillus and pediococcus.

What are wild and sour beers? and what is the difference? Wild and Sour are two separate things that are often confused and typically misused as interchangeable beer descriptors. There are shared flavor profiles between both styles, but it is important to know their differences.

Wild beers are fermented or conditioned with wild yeast called Brettanomyces or Brett for short. Now even though it is called wild yeast it is commonly acquired from yeast laboratories. However, you can gather it naturally from the air as is common in Europe. This is done through an open fermentation process where the beer is chilled in large open vats that allow airborne wild yeast to settle on the surface of the liquid as it cools. Then it is transferred into a closed fermentation vessel and allowed to ferment and mature until it is ready to serve.

This yeast produces funky characteristics in the beer – some describe it as a stinky cheese flavor, horse blanket, barnyard funk, overripe fruit – you get the picture. Though those sound disgusting they actually are quite pleasant and sought after by many beer fanatics.

Sour beers on the other hand get their tart acidic character from bacteria – lactobacillus and pediococcus are common types of souring bacteria that you will find in your sour beers. These bacteria are commonly found naturally on the skins of fruit as well as in your yogurt! They produce dried fruit aromas, acidic, candy-like flavors and aromas. Beers can have these bacteria contributing flavor during the fermentation process or while the beer is conditioning with fruit, and or in barrels etc.

Let’s break it down a bit more.

Wild yeast and sour bacteria come together in some styles, such as spontaneous ales (lambics for example) or American mixed-culture beers (a blended culture of different wild yeast strains and different souring bacterias). These beer styles are full of brettanomyces and souring bacteria.

Both Wild and Sour styles of beer can be produced by:

Check out our informative wild and sour beer poster! 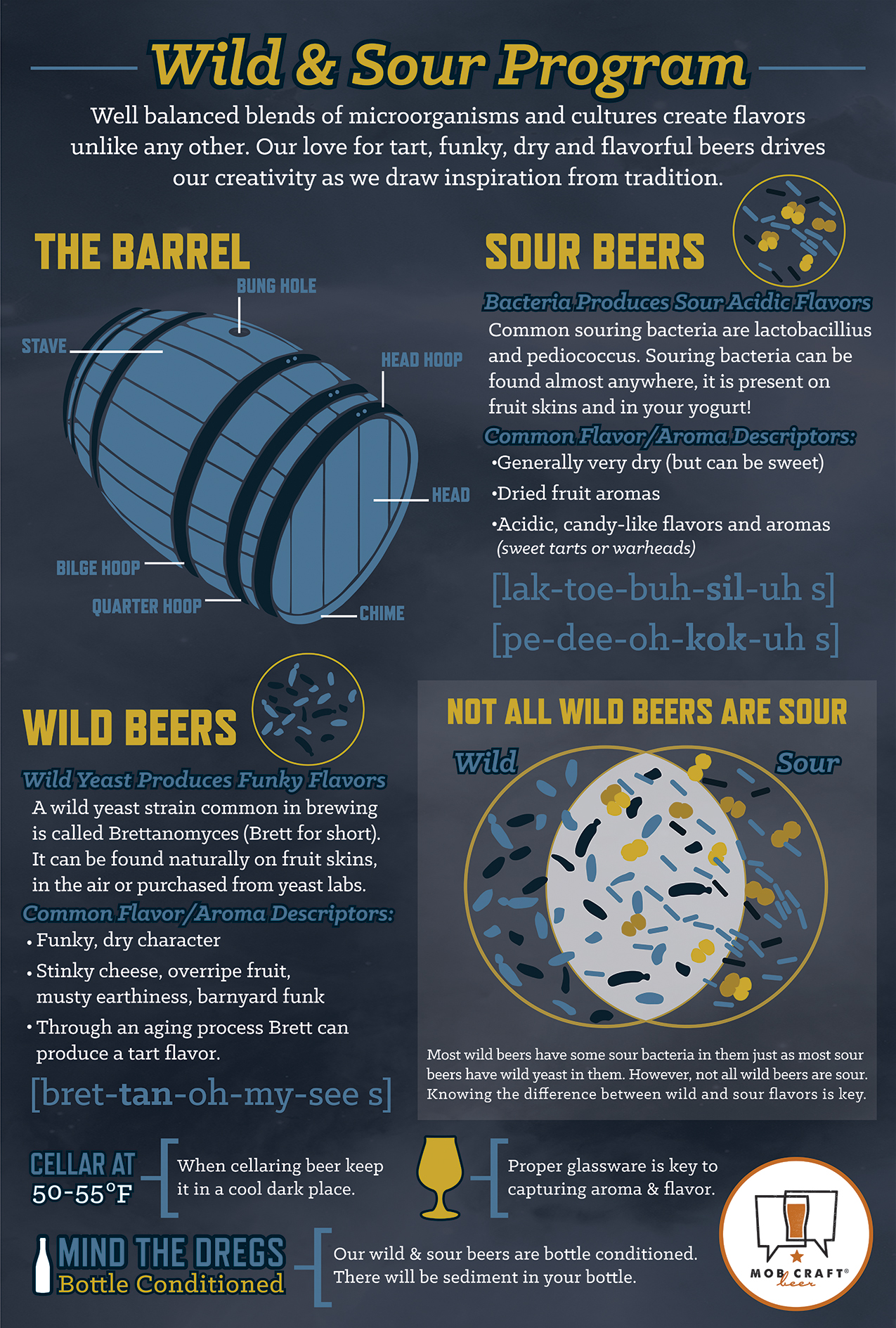