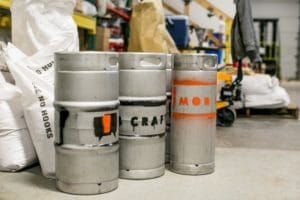 (Editor’s Note: this is Post #2 in our series called, “Squinting at Two Goblets: Similar Beer Styles and How to Tell the Difference.” Find Post #1 here.)

If you’re like me, you’ve “loved sours!” for years, while stuck within your severely limited, sour social circle. You cling to your two close, sour friends, Monk and Duchesse, watching from afar the trending, sour-beer, love fest.

You’re embarrassed and secretive of your sour-beer prudery. You envy/hate hotshots like sour beer blogger The Madfermentationist, especially when they brag about all the sours they’ve been with:

Your friends try to set you up, squinting, as they ask, Do you lean dry? Sweet? Let me get you something funky! You finish every beer feigning enthusiasm, fearing whatever tragic misadventure you know awaits to reward your fakery.

Sure enough, your best friend buys you a glass of young, unblended lambic that has a foreboding, urine-green hue. It’s your first-ever experience with butyric acid in beer — that byproduct of wild yeast that some describe as “baby sick.” And, right in front of her, you gag the first sip back into your glass.

By 2015 you see the sour beer trend is clearly not going away. So you commit to training your palate for real.

But then the problem is cost. Cheapskate of rare-order that you are, you see sours on a menu, and the pricing blows the mousse right out of your thinning hair. Eleven dollars for a Rodenbach Foederbier (5.5% ABV), or $11 for a Trappistes Rochefort 10 (11.3% ABV)? Is that a trick question? Could you ever NOT choose the big malt bomb that’s twice as strong for the same price?

After another year of grinning and bearing, without you even knowing it, your palate has evolved. A friend then treats you to a Boulevard Brewing, Love Child No. 5. And popping its cork throws open the previously immovable door to the Sour Center of your frontal cortex. The overwhelming joy shuts down short-term memory and over-clocks persistent reward stimuli. How else would you lose sight of the price tag and buy three more rounds of the $32 beer?

In the days following, you feed your newfound addiction, amazed at the tectonic shifts of taste and value in your head and heart. As buyer’s remorse sets in, though, you go to the Internet to figure out where to find the cheap sour beer. To your horror, aside from the cruel joke of headlines like this, you learn there is no such thing.

Aargh! Why Does Sour Beer Cost So Much?

Why does sour beer fetch such a premium?

And while we’re at it, we’ll also ask, What’s the difference between the sour styles of Flanders Red (e.g., Duchesse de Bourgogne) and Flanders Brown (e.g., Monk’s Café)?

Have another look at that equation from above:

The most salient difference between the two, besides ABV, is aging. The Trappist monks brew their Rochefort 10 quad in less than a month; the Rodi takes years. So aging equals value. (Duh.)

There’s more, of course. Rodenbach ages the Flanders Red in barrels. Think of all the costs involved in barrel aging:

• proper storage of the barrels, including land and a warehouse building
• personnel to stock/drain/move barrels
• skilled-craftsman maintenance of the barrels (cooperage)
• cost of the inventory just sitting there in barrels for years

Add to that the industrial cost of firewalling sour product lines from regular product lines – dedicated equipment, sterilization regimens, etc. If the souring microbes jump the firewall, they’ll ruin whole batches of regular brews. Then there’s the heaviest cost of all: risk. Sour brewing has much higher rates of manufacturing failure; a failed sour brew means years of profit down the drain.

It’s a wonder sour beer doesn’t cost way more than it does.

The Flanders Red and Flanders Brown are both aged for years. They also contain brewing ingredients very similar to one another. In appearance, aroma, and flavor, many individual Reds and Browns can’t be distinguished from one another.

So why do the Style Guidelines of the Beer Judge Certification Program (BJCP) split them into two separate categories: “17B, Flanders Red” and “17C, Flanders Brown/Oud Bruin”? Should we really consider them two distinct styles?

“In Belgium, there are no styles.”

He meant that both factually and in praise of the Belgian’s boundary-blurring creativity. Lambics fermented like Browns, Reds with the ingredients of Berliner Weiss, Gose’s aged like American Wild Ales.

Belgian brewers seem so unconcerned with beer styles, it’s not uncommon to see both “red” and “old brown” on the label of a single beer. According to industry urban legend, the name “Flanders Red” didn’t originally denote a style, at all. Industry folk say the phrase was a masterstroke of branding by Rodenbach. Their new product at the time stood apart as the first sour brown ale with its novel clarity and burgundy hue.

Brett vs. no Brett

Rodenbach ages their Flanders Red in giant oak barrels, called foeders. Leifmans ages its Flanders Brown in steel tanks. These two breweries, by the way, represent the industry standard for each style.

Rodenbach’s wood barrel imparts complexity of all kinds to the beer. Of course it does. It’s wood in contact with liquid for 18 to 36 months at a time. Tannin from the wood alters the sour acidity with both an astringency of its own and a more complex mouthfeel.

More fundamentally, the barrel inoculates the beer with Brettanomyces and other microbes living in the wood. The diverse lot of resident critters add even more character than the wood, itself.

They join with the yeast and bacteria that survived the primary fermentation (Saccharomyces, Lactobacillus, Pediococcus). And the new ecosystem takes the beer through its long, long secondary and tertiary fermentations.

The permeable wood lets oxygen get to the beer. Oxygen feeds microbes that would normally be controlled by an anaerobic environment. This includes Brett and Acetobacter. Acetobacter eats sugars and produces acetic acid (think vinegar). Makes sense, right? Oxidized wine becomes vinegar as Acetobacter converts its sugars to acid. During barrel aging of a Flanders Red, oxygen encourages acetobacter precisely for its sour acid.

Imagine how much the aging beer changes with all those microbes competing, proliferating, and dying away over a period of years. They try to outdo one another, feeding and producing flavor compounds as waste. They kill each other and kill themselves. Even the death and detritus gets used as food or breaks down, leading to chemicals that flavor the beer. We’re talking serious acid and ester complexity, here.

All that additional microflora leads to a Flanders Red of more complete fermentation — 90% and higher. (The Flanders Brown ferments up to 80%, only.) This leaves the beer drier and lighter in body. The Brett signs its signature of “wild” personality — funk, barnyard. It will also knock back the Lacto. and Pedio. a bit. That brings the sharp, acetic-acid tartness to the fore. Sounds like a lambic? Yep. The flavors and mouthfeel emphasize the filial relationship between the Flanders Red and the lambic.

To Brett or Not to Brett?

Meanwhile, the Flanders Brown ages in stainless steel tanks. So no Brett. Unlike in wood barrels, the non-pourous surface and lack of oxygen of the steel tank prove inhospitable. Nor is any Brett added artificially. Without it, the lactic acid (think yogurt) dominates the flavor profile — a softer tartness than the Red’s sour bite. Without the Brett, more sugar remains unfermented — leaving a maltier, sweeter, fuller-bodied beer. Without the Brett, the Brown doesn’t carry the wild character of the Red.

So, we have a study in contrasts. East Flanders Brown vs. West Flanders Red. Think of the Oud Bruin as more of a brown ale that’s tart. The Red is more a sour ale that’s a burgundy color.

Liefmans, the go-to brewer of Browns, plays up the “brown ale” aspect. They boost the hops of Goudenband. (Reds minimize hop flavor or bitterness.) The hops and malt-forward aspect make the Flanders Brown more classic-ale in character. Though certainly tart, the Flanders Brown gets commonly described as “rich,” “bready,” and “soothing.” People speak of Reds more as “startling,” “quenching,” and “fruity” — distinctly “Sour,” with a capital-S.

There are always exceptions to any rule, of course. And, when it comes to the exceptions, stylistic separation seems pretty, well-nigh impossible. But what of the standards, the canon, Rodenbach and Liefmans? The Red is aged in oak; the Brown in steel. The Red starts with complex starches to later feed the Brett; the Brown has no Brett. These differences make a real…uh… difference!

First, it’s Oud Yah! A Wisconsin Sour. A sour brown ale. And get this: it’s aged in the barrels that once held Noctis (the bourbon-barrel aged RIS we released this past summer). Look for it next week in stores and on tap!

What sour beers do you love?

Start a TOP 5 SOUR BEER list in the Comments, below.

CHOOSE WHAT GETS BREWED NEXT! Vote in this month’s upcoming competition.